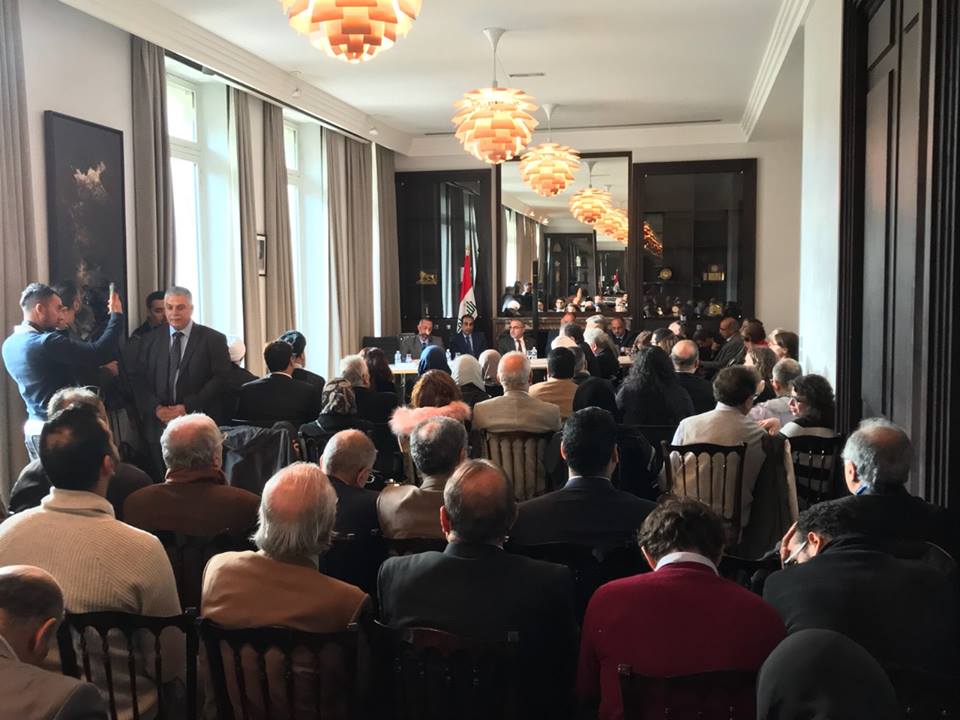 Imam Hussein Holy Shrine’s "Karbala, City of Holiness and History" Photo Exhibition was part of the cultural event organized in the Iraqi Embassy in Paris, amid an attendance of official, public and diplomatic figures headed by the Ambassador Ismael Shafiq Mihsin.

The event was commenced by a word from the Iraqi Ambassador who said, “We welcome this cultural event of the Imam Hussein Holy shrine in the corridors of the Iraqi Embassy in Paris as this reflects the history and significance of our civilization,” stressing that they fully support these types of events that introduce the culture and civilization of Iraq to the west.

Then a word from the shrine’s official delegation delivered by Hasan Ali Kadhum in which he stated, “We sincerely thank the Iraqi Embassy for their great cooperation and efforts for this event, which concerns the holy city of Karbala, its heritage and its antiquities.”

"As you know, the fierce attack on the terrorist gangs swept vast swathes of Iraqi land in mid-2014 and killed thousands of Iraqis from all sects, but the will of the people whose civilization extends for tens of centuries, gathers its strength and addresses this vicious onslaught through the cooperation and unity shown by all Iraqis from all sects, based on the fatwa issued by the Supreme Religious Authority in Najaf,” added Kadhum.

The head of the delegation continued saying, “The role of the holy shrines, especially the Imam Hussein Holy Shrine, has been pivotal in encouraging citizens to volunteer for defending Iraq and supporting the Popular Mobilization Units (PMU), which became an official institution approved by the Iraqi parliament and includes Shia, Sunni and Christian citizens.  The PMU, while carrying out the task of liberating the country from terrorist gangs, has shown great discipline and is distinguished in its efforts to preserve the lives of civilians and their property, adhering to the recommendations of the religious authority which forbade the abuse of innocent people.”

He ended his word saying, "The Imam Hussein Holy Shrine has contributed in investment, development and services projects remarkably to promote the level of development in Iraq in general and Karbala in particular.”

For his part, supervisor of the International Media Center French publications Dr. Ala al-Temimi said, “Media, in particular international media, has been the priority of the Imam Hussein Holy Shrine. The International Media Center focuses on two main roles: The first is the cultural and media exchange between Iraq and the world through the organization of cultural events as well as hosting prominent media institutions and personalities from various countries of the world, including France, to visit Iraq and be acquainted with the country.  The second part focuses on the publication of magazines, books and pamphlets in several languages including Arabic, English, German, Turkish, Urdu, Persian, and of course, French. I have the honor to supervise the French publications of the holy shrine, which are printed and distributed in different countries and aim to disseminate the Islamic culture.”

It is to mention that this was the holy shrine’s first-ever cultural event in the European country, which included a photo exhibition and screening of a documentary film about Karbala, aiming to connect the Arab and Islamic communities to the Imam Hussein Holy Shrine.