Al-Karbalaey to al-Azhar Delegation: Islam stressed on communication between Muslims and preservation of the Islamic nation 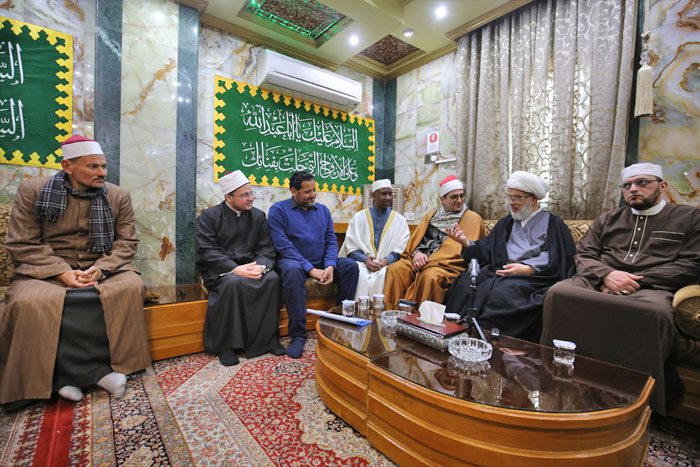 The representative of the Supreme Religious Authority Sheikh Abdul-Mahdi al-Karbalaey emphasized, during a meeting with a delegation of scholars and professors of al-Azhar, on the importance of meetings and visits by scientific and religious figures to Iraq in order to see the reality of the situation in the country.

Al-Karbalaey said during the meeting, which was attended by a reporter from the International Media Center (IMC), "Islam and the Infallible Imams, peace be upon them, have greatly stressed on communication and convergence between Muslims and warned of the crossroads and intersections, which weaken the Islamic nation."

The Chief Cleric of the Imam Hussein Holy Shrine also pointed out that "hostile media does not convey the truth, but seeing reality reveals the truth of the special rituals and what happens during the massive march to visit Imam Hussein on certain occasions. These visits reveal the truth of the conflict and the battle that is taking place – is it a battle between Iraqis or is it a conflict with the Takfiri ideology, which has no relation with Islam?”

For his part, member of the Azhar delegation Sheikh Mohammed Ramadan remarked, "The visit came to express the love and coexistence and the consolidation of relations with the holy shrine,” mentioning, “the upcoming visits will be more than before."