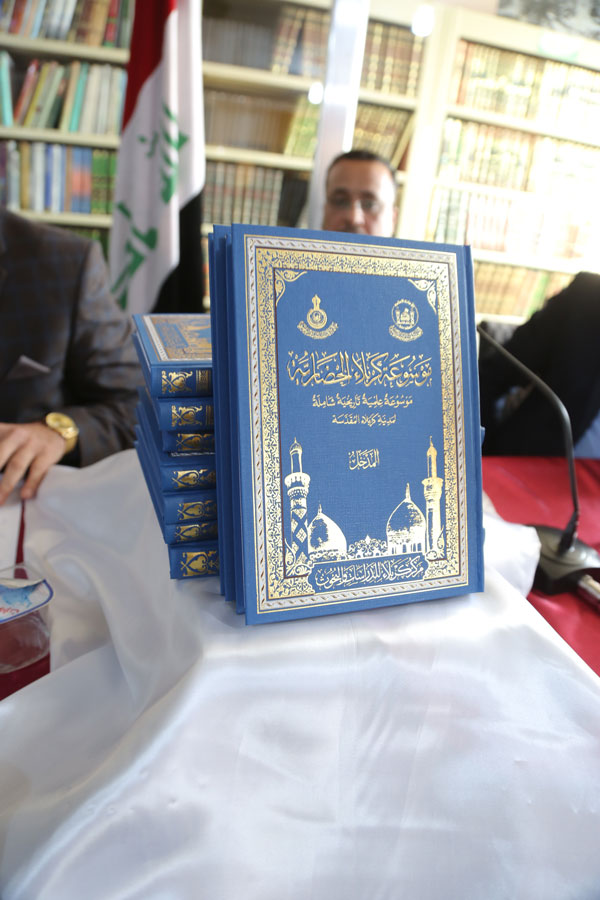 Karbala Center for Researches and Studies of the Imam Hussein Holy Shrine has published Karbala Civilizational Encyclopedia, including everything related to the city’s history since its inception.

“The encyclopedia covers the fascinating history of the holy city of Karbala from the era before Islam and until today,” said Abdul-Amir al-Quraishi, center director, in the scientific symposium held at the center’s headquarters in al-Baladiya district.

Over 150 researchers from Iraqi, Iranian, Turkish and Lebanese universities compiled the great accomplishment.

The director continued saying, “The historical, geographical, social, political and cultural aspects are explained in the current forty chapters in addition to everything affiliated to the life in the City of Imam Hussein.”

The attendees confirmed that the Karbala Civilizational Encyclopedia is a great source and book of reference to students or those interested in the history of Karbala.

Comments
Facebook Comments
Muhammad ibrahim khan
Pakistan
2018-1-17
Please send me this book. I would be grateful.
Contactus Form
Salam brother, it is only available at the holy shrine and the Center.
Related topics
UPDATE: New English Website of Imam Hussein Holy Shrine Launching SOON!
Al-Khoei meets with Pope Francis and calls for tolerance and moderation
Karbala’s heritage displayed in Bein al-Haramein
National Quran Competition for Women in Imam Hussein Holy Shrine
A special handwritten letter from the Supreme Religious Authority to the martyrs of the fatwa
Symposium on the rapprochement between Islamic sects in Najaf
UN Representative in Iraq: Directives of Ayatollah Sistani essential for continuing assistance
Al-Karbalaey to al-Azhar Delegation: Islam stressed on communication between Muslims and preservation of the Islamic nation
Imam Hussein Holy Shrine organizes scout camp for the blind
South Korean Ambassador to Iraq praises Ayatollah Sistani’s Fatwa