A Glance at the Life of Imam Hasan al-Mujtaba 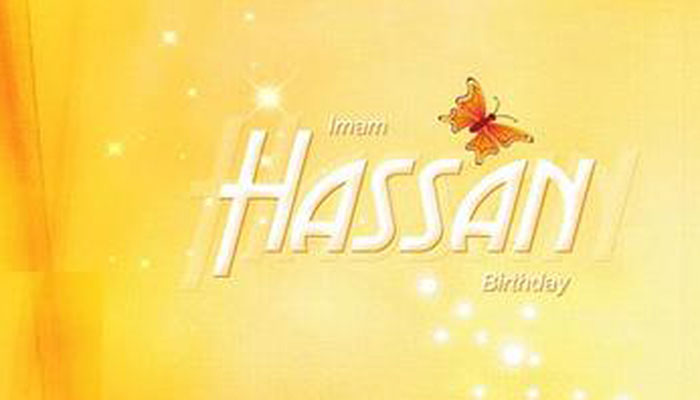 Title : al-Mujtaba (The Chosen One)

Imam Hassan, the second Holy Imam of the Shia Muslims and the leader of the youth in Heaven, was born in the holy city of Medina on 15th Ramadhan in third year after Hijrah. On the Joyous, Happy and auspicious occasion of the birthday anniversary of Imam Hasan we extend our heartiest greetings and warm felicitations to the Millions strong Muslim Nation.

His Birth He was born in Medina on the night of the middle day of the month of Ramadan, in the year 3 A.H. He was the eldest son. When Al-Hasan was born, the Prophet, may Allah bless Him and his family, took Him. Then the Prophet said the adhan (call to prayer) in Al-Hasan-s right ear, and said the iqama (words similar to the adhan) in his left ear. Then he sacrified a ram for Him (in the ceremony of Aqiqa). Then the Prophet shaved his hair. So the weight of Al-Hasan`s hair was a the aqiqa and giving alms as equal as the weight of hair have become Sunna (an act of the Prophet) The Prophet named him Hasan. People did not know such a name in the pre-Islamic period. Also he gave him Kunya (i.e the name by which an Arab is usually referred to and which refers to him as the father of someone, usually his eldest son) as Abu Mohammad, Al-Hasan had no Kunya other than this (Abu Mohammad).

No one was more like the Apostle of Allah, may Allah bless Him and his family, than Al-Hasan b. -Ali, peace be on Him, in form manner, and nobility. In this manner the describers have described Al-Hasan and said; -He (Al-Hasan) had a white, reddish face, He had black eyes, smooth cheeks, thick heard, and curly, plentiful hair, His neck was as white as a jug of silver, His body was good. He had large shoulders, and bid fleshy bones. He was of medium height; neither long nor short, He was handsome; the best of all people in face.

The Holy Imam spent the first seven years of his life under the care and guidance of his grandfather, the Holy Prophet. This early training made the Holy Imam outstanding in his knowledge, piety, tolerance, intelligence and courage. The Holy Imam and his brother Imam Husain were very dear to the Holy Prophet. He used to carry them on his shoulders and once told the people, \Hasan and Husain are the leaders of the youth of Paradise.\ Bibi Fatima once brought her two sons to her father and said, \O Apostle of Allah, these are your two grandsons. Give them something as an inheritance.\ The Holy Prophet replied, \Hasan shall have my form and my nobility and Husain shall have my generosity and bravery.\ As a child, the Holy Imam used to listen attentively to the verses of the Holy Quran as they were revealed.

To the surprise of the Holy Prophet, his daughter Bibi Fatima would often recite the exact text of a newly revealed verse before he personally told her about it. When he asked her how she knew, she informed him that the Holy Imam had already taught her the verse when he heard the Holy Prophet recite it in the mosque in front of the people. He was quite wealthy and could have lived in luxury if he desired, but he preferred to spend his money to help the poor and needy. Twice in his life, he gave away his entire wealth in charity and began all over again.

One of the Holy Imam`s wives was Ju-da binte Ash-ath bin Qays. Muawiya conspired with Ju-da to give the Holy Imam some poison. In return, she would get 100,000 dirhams and he would marry her to Yazid. This evil woman put poison in the Holy Imam-s drinking water and he immediately fell gravely ill as a result. After great suffering, the Holy Imam departed from this world. Just before he died, he entrusted the affairs of Imamat to his brother Imam Husain and made him the guardian of his own family. The Holy Imam had stated that before he was buried in Jannatul Baqee, his body should be taken to the grave of the Holy Prophet for a final visit.

When the Bani Hashim attempted to carry out the last wishes of the Holy Imam, they were stopped by members of the Bani Umayyah, who thought that they wished to bury him next to his grandfather. Imam Husain did not want bloodshed so he directed that the body be taken straight to Jannatul Baqee, where Imam Hasan was buried next to his grandmother Fatima binte Asad. He was 48 years old when he was martyred. When Ju-da came to Muawiya to claim her reward, he gave her the money, but refused to marry her to Yazid, declaring that a woman who could poison one husband would certainly not hesitate to poison another.