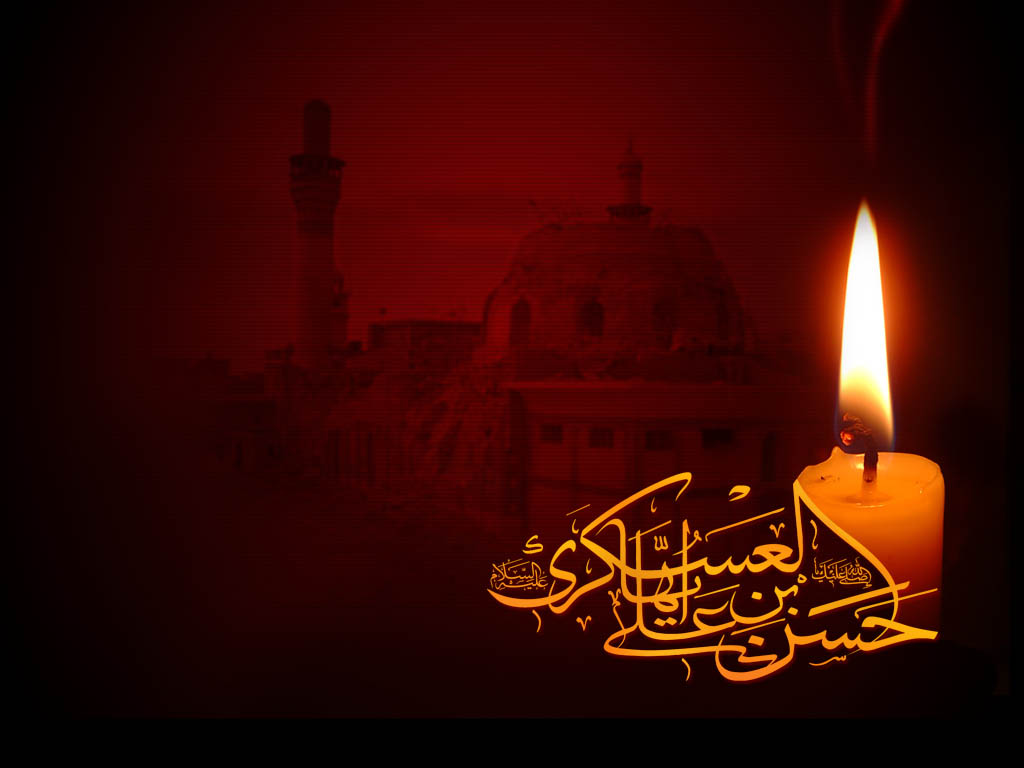 Imam Hassan al-Askari was born in Madina, on 8th day of the month of Rabi' Thani, in the year 232 A.H. He was called 'al-Askari' in connection with the district of Askar in the city of Samarra' in which he (the Imam) and his father, Imam Ali un-Naqi al-Hadi were imprisoned by the Abbasid caliphs.

The holy Imam was born and brought up under the care of his father, Imam Ali al-Hadi, who was well-known for his divinely inspired knowledge, holy striving (Jihad) and good acts and from him he learned the best of morals, the abundance of knowledge, the spirit of belief and the good merits of Ahlul-Bayt.

Indeed, he (the Holy Imam) accompanied his holy father and lived whit him more than twenty-three years, during which time he comprehended the sciences of the descendants of Holy Prophet Muhammad (S.A.W.) and learned the inheritance of the divine leadership. He looked like his father in the fields of knowledge, good deeds, jihad, and calling to reform in the community of his holy grandfather, Prophet Muhammad.

The Noble Character of Imam al-Askari

Indeed, Imam al-Askari, like his noble fathers, was a prominent scholar and an Imam whom no one could ignore. He was the chief of religious scholars, an ideal of worshippers, a leader of politics and opposition, and towards whom the hearts of people were adhered with love and respect.

In spite of the existence of the brutal terrorism of the Abbasid rule, and their political hostility towards Ahlul-Bayt, and the continuous pursuit of authorities for him and his followers, and throwing them in prisons and jails, the caliphs of his time could not hide his personality or weaken his scientific and political role and his social status. Thus, the spiritual authority of the Holy Imam was imposed upon the rulers and the opponents of his time.

Imam al-Askari lived during the times of the Abbasid caliphs, Mu'taz, Muhtadi and Mu'tamid. The Holy Imam suffered more afflictions, confinement, terrorism and pursuit by the three above-mentioned brutal and cruel caliphs and was, also, exposed to imprisonment at different times before them.

The last caliph, whom the Holy Imam lived with, Mu'tamid, was dissoulte, disposed to entertainment and pleasures, singing, and committing the forbidden. All these caused people to hate him,

The Holy Imam suffered different kinds of troubles and torments in the hands of the caliph, Mu'tamid, who surrounded him with intensive security forces to keep an eye on him and pursue those who wanted to contact him.

The reason that caused the Abbasids to be more envious against the high position of the Holy Imam, among the Ummah, was their being afraid of his son, the Awaited Imam Mahdi. They knew that Imam would be the son of Imam Askari whom he referred to in one of his letters:

"They thought that they could kill me in order to cut off my offspring, but Allah denied their sayings and praise be to Allah."

Imam Abu Muhammad Hassan al-Askari was poisoned by the caliph, Mu'tamad, and, thus, suffered severely and was martyred on eighth of the month of Rabi' Awwal in the year 260. At the time of his death, he was twenty-eight years old. He was buried in the house in which his father was buried in Samarra'. He left behind his son - Living Holy Awaited Saviour Imam Muhammad al-Mahdi the one who is awaited to bring about the heavenly rule of truth in the whole world.

Some Hadiths of Imam Hasan al-Askari

2- As for those who accept to sit in a place other than the first row of a session, Allah and His angels will bless them until they leave that session.

3- Imam Hasan al-Askari answer the man who asked him a miracle or a proof of Imamat: The punishment will be doubled for those who refuted the miracle or proof of Imamat after it had been presented to them according to their demand. He who shows patience will be supplied with the support of Allah. People are accustomed to publicize false missives that they themselves forge. We supplicate to Allah for guiding us (to the right). Matters are either submission or destruction. The end results of everything belong to Allah.

4- Imam al-Askari answered the man who reported to him the disagreement of Shias: Allah has addressed to the intelligent exclusively. People are of different classes: some are the discerning on a way of salvation; they are holding fast to the right and clinging to the branch of the origin; they are neither doubtful not suspicious; they do not consider a shelter other than me. Some are those who have not received the right from its very people; they are like those who embarked on a ship; they ripple when the sea is wavy and calm down when the sea is calm. Some are those who are dominated by the Shaitan; their one and only job is to refute the people of the right and substitute the wrong for the right out of envy. Hence, leave those who went astray to the right and left. When a shepherd wants to gather the hoard, he will not need to exert efforts for so. Beware of divulging our secrets and seeking power, for these two things drive into perdition.

5- Within the unforgivable sins are the sins whose committers wish if they would not commit anything else." Imam al-Askari then said: "Polytheism of people is more hidden that the creeping of ants on a black piece of cloth in a gloomy night.

6- "Bismillah ar Rahman ir Rahim -- in the Name of Allah the Beneficent the Merciful-" is as near to the Great Name (of Allah) as the iris to the white of the eye.

7- In the time of Imam al-Hasan Askari, some of the Shias disagreed about his Imamat; therefore the following message was publicized carrying his signature: No one of my fathers suffered the (affliction of the) disagreement of such a group like I did. If this matter of Imamat that you have believed in and embraced is temporary, then I doubt it. If it is as permanent as the affairs of Allah, then what is the meaning of this doubt?

9- To greet everyone you pass by and to sit in a place other than the first class of a session are signs of modesty.

11- Within the misfortunes that deal a deathblow is the neighbor who overshadows any good feature that he notices and propagandizes any defect that he notices.

12- Imam al-Askari said to his adherents (Shias) I command you to fear Allah, show piety to your religion, work hard for Allah's sake, tell truths only, return the deposits to their owners whether they are pious or sinful, prostrate yourselves before Allah for a long time, and treat your neighbors courteously. These are the matters that Mohammaed brought. Offer prayers in the middle of your folks, attend their funeral ceremonies, visit their ill ones, and fulfill their rights. I am pleased if people point to you and say "this is Shi'ite", when you behave piously, tell truths only, return the deposits to their owners, and condutct courteously with people. Fear Allah, be good (examples) and do not be evil. Attract people's fondness of us and save us from every awful character, for we are surely the people of every good thing that is said about us, but we are definitely not the owners of any evil thing that is imputed to us. We enjoy a (distinctive) right in the Book of Allah, a relation (of kinship) to the Messenger of Allah, and a purification whose source is Allah. Only can the liars claim of enjoying our distinctive features. Refer to Allah very much, refer to death, recite the Quran, and bless the Prophet. A single blessing of the Prophet is ten advantages. Retain the matter of which I have commanded you. Allah keep you under His supervision. Peace be upon you.

13- Very much offering of prayers and fasting is not the worship; the very worship is the very much pondering over the affairs of Allah.

14- The worst servants - of Allah - are those who are two-faced and two-tongued; they praise their present friends and backbite the absent; they envy them for obtaining graces and disappoint them when they suffer a misfortune.

16- In 260 A.H. Imam al-Askari said to his adherents: We have previously ordered you to put the rings in your right hands when we were among you. Now, because you will no longer meet us (normally), we order you to put your rings in your left hands until Allah make your, as well as our, Question prevalent. This is surely the best proof through which you can prove your being loyal to our leadership; i,e. the leadership of the Prophet's family. All the attendants took their rings out of their right hands to put them in the left. The Imam then ordered: Convey this commandment to all of our adherents -Shias.

17- The least comfortable of people is the spiteful.

19- You are plunging into decreased deadlines and limited days. He who sows good will harvest delight and he who sows evil will harvest regret. Each cultivator will gain only what he has cultivated. The slow will not gain but his own share. The acquisitive will not catch that which is not his.

The source of every advantage is Allah, and the actual protector from every evil is Allah, too.

20- The faithful believer is a blessing for the believers and a claim against he disbelievers.

21- The heart of the foolish is in his mouth and the mouth of the wise is in his heart.

22- The guaranteed sustenance should not engage you from the ordained deed.

23- The excessiveness of the (ritual) ablution is as same as defect.

25- Fatigue is the friend of the ignorant.

26- Nothing is above two characters: believing in Allah and benefiting the friends.

27- The babies who dare their fathers will surely treat them impiously when they attain maturity.

28- To show happiness before the grieved is not a sign of good mannerism.

30- To educate an ignorant and to prevent a habit are two impossible actions.

31- Modesty is an unenviable favor.

32- Do not bestow upon anyone with matters that are difficult for him.

35- It is so ugly for a believer to follow a passion that causes him humiliation.