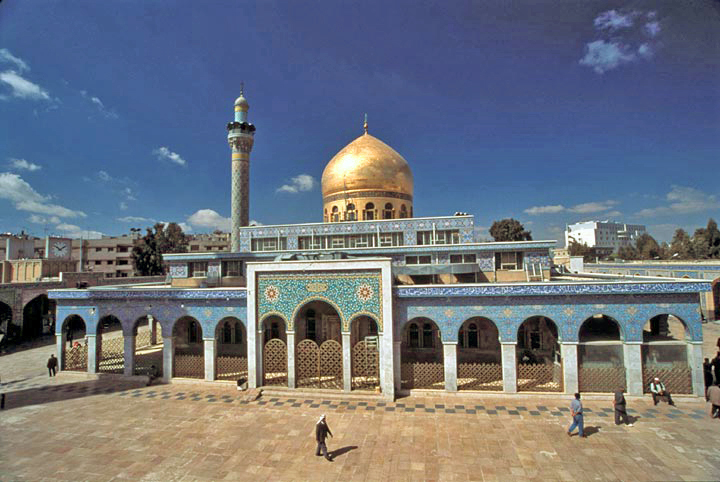 Sayyida Zainab is daughter of Imam Ali & Lady Fatima and the Greatest Messenger of the Hussaini Revolution. She was born in the holy city of Medinah on fifth Jamadi-ul-Awwal in the 5th year of Hijrah/627 A.D. Her Holiness became famous for her knowledge of the Holy Qu'ran and virtuous life. On the Happy and Auspicious occasion of the Birthday Anniversary of Hadrat Zainab we extend our Heartiest Greetings and Felicitations to all the lovers of the Holy Ahlul Bayt in the world.

Her Holiness became famous for her knowledge of the Holy Qu'ran and virtuous life. In her character she reflected the best attributes. In sobriety and serenity she was likened to Umm-al-Mumineen Hadrat Khadija(A.S.),her grand-mother, in chastity and modesty to her holy mother Hadrat Fatima(A.S.) and in eloquence to her holy father Imam Ali(A.S.).

Sayyida Zainab (A.S.) proclaimed to the world the greatest sacrifices made by Imam Husayn(A.S.) and other members of the family of the Holy Prophet of Islam(S.A.W.) who were brutally martyred at Karbala in 61 A.H by the Yazidi forces.

Growing Up in Medina

Zaynab (A.S.) shared with her brothers and sister the extraordinary position of having such examples to look up to, emulate and learn from, as her grandfather, the Prophet of Allah [s.a.w.], her mother Fatima (A.S.), daughter of the Prophet, and her father Imam Ali (A.S.), cousin-brother of the Prophet.

In the pure environment that enveloped her, she absorbed the teachings of Islam that her grandfather imparted and after him her father. Here too she learnt to master all household skills with great proficiency. She had barely attained the tender age of seven when her beloved mother passed away. Her mother's death had closely followed her cherished grandfather's passing away. Sometime later Imam Ali [a.s ] married Umm ul-Banin, whose devotion and pledge encouraged Zaynab (A.S.) in her learning.

Whilst still a young girl she was fully able to care for and be responsible for the running of her father's household. As much as she cared for the comforts and ease of her brothers and sisters, in her own wants she was frugal and unstintingly generous to the poor, homeless and parentless.

After her marriage her husband is reported as having said, "Zaynab is the best housewife."

From very early on she developed an unbreakable bond of attachment to her brother Imam Husayn (A.S.). At times, when as a baby in her mother's arms she could not be pacified and made to stop crying, she would quieten down upon being held by her brother, and there she would sit quietly gazing at his face. Before she would pray she used to first cast a glance at the face of her beloved brother.

One day Fatima (A.S.) mentioned the intensity of her daughter's love for Imam Husayn (A.S.) to the Prophet [s.a.w.]. He breathed a deep sigh and said with moistened eyes, "My dear child.

This child of mine, Zaynab, would be confronted with a thousand and one calamities and face serious hardships in Karbala."

Zaynab [as.] grew into a fine statured young woman. Of her physical appearance little is known.

When the tragedy of Karbala befell her in her mid-fifties she was forced to go out uncovered. It was then that some people remarked that she appeared as a 'shining sun' and a 'piece of the moon'.

In her character she reflected the best attributes of those who raised her. In sobriety and serenity she was likened to Umm ul-Mu'minin Khadija, her grandmother (A.S.); in chastity and modesty to her mother Fatima Zahra (A.S.); in eloquence to her father Ali (A.S.); in forbearance and patience to her brother Imam Hasan (A.S.); and in bravery and tranquility of the heart to Imam Husayn (A.S.). Her face reflected her father's awe and her grandfather's reverence.
When the time came for marriage, she was married in a simple ceremony to her first cousin, Abdullah ibn Ja'far Tayyar. Abdullah had been brought up under the direct care of the Prophet [s.a.w.]. After his death, Imam Ali (A.S.) became his supporter and guardian until he came of age. He grew up to be a handsome youth with pleasing manners and was known for his sincere hospitality to guests and selfless generosity to the poor and needy.

Together this young couple had five children, of whom four were sons, Ali, Aun, Muhammad, and Abbas, and one daughter, Umm Kulthum.

In Medina it was Zaynab's practise to hold regular meetings for women in which she shared her knowledge and taught them the precepts of the Deen of Islam as laid out in the Holy Qur'an. Her gatherings were well and regularly attended. She was able to impart the teachings with such clarity and eloquence that she became known as Fasihah (skillfully fluent) and Balighah (intensely eloquent).

In the thirty-seventh year A.H. (after Hijrah), Imam Ali (A.S.) moved to Kufa to finally take up his rightful position as khalifah. He was accompanied by his daughter Zaynab (A.S.) and her husband.

Her reputation as an inspiring teacher among the women had preceded her. There too women would throng to her daily sittings where they all benefited from her erudition, wisdom and scholarship in the exegesis of the Qur'an.

The depth and certainty of her knowledge earned her the name given to her by her nephew, Imam Ali Zayn ul-Abidin (A.S.), of 'Alimah Ghayr Mu'allamah, she who has knowledge without being taught.

Zaynab (A.S.) was also nicknamed Zahidah (abstemious) and 'Abidah (devoted) because of her abstemiousness and piety. She found little of interest in worldly adornments, always preferring the bliss and comfort of the Next World over that of this world. She used to say that for her the life of this world was as a resting place to relieve fatigue along a journey. Humble and of high morals, her main concern was to strive to please Allah and in doing so she avoided anything which was the least bit doubtful.

When Zaynab (A.S.) learnt of her brother's proposed journey to Kufa she begged her husband to give her leave to accompany her brother. Abdullah pointed out that such a journey was fraught with difficulties and hardship. Zaynab (A.S.) insisted, saying, "My mother did not leave me behind to watch from afar as recreation the day when my brother is all alone, surrounded by enemies with no friend or supporter. You know that for fifty-five years my brother and I have never been separated. Now is the time of our old age and the closing period of our lives. If I leave him now, how shall I be able to face my mother, who at the time of her death had willed, 'Zaynab, after me you are both mother and sister for Husayn (A.S.)'? It is obligatory for me to stay with you, but if I do not go with him at this time, I shall not be able to bear the separation." Abdullah himself had wanted to accompany the Imam, but since he had been weakened by illness, he gave her permission to go on this destined journey. With her he sent two of their sons.

Zaynab (A.S.) had been prepared all her life for what was written for her and her brother. She preferred to face the trials of Karbala than to ever be separated from him.

Having decided to leave, Imam Husayn (A.S.) ordered that litters be prepared for the ladies of his family. Abu'l-Fadl Abbas, his half-brother (for they shared the same father), helped Zaynab (A.S.) and her sister Umm Kulthum into their litter. They were followed by two young girls, Fatima Kubra and Sakina, daughters of Imam Husayn (A.S.).

After the first day of their journey, the party camped at Khuzaymiyyah for the night. While Zaynab (A.S.) was seeing to her brother's comfort, he said to her, "What will come to pass has long since been decreed."

When later on their journey, they reached Ruhayma, they found their way blocked by Hur ibn Yazid Riyahi. Sakina saw what had happened and when she told Zaynab (A.S.), Zaynab wept and said to her, "Would that the enemy killed all of us rather than slay my brother."

When Imam Husayn (A.S.) heard of his sister's distress, he went to her tent and she said to him, "O my brother, talk to them. Tell them about your nearness to the Holy Prophet and of your kinship with him." Imam Husayn (A.S.) replied, ''O sister! I spoke to them at length. I tried to convince them but they are so immersed in misguidance and obsessed with greed that they cannot set aside their evil intentions. They will not rest till they have killed me and seen me rolling around in my blood. O sister, I advise you to patiently endure the forthcoming troubles. My grandfather the Holy Prophet had told me of my martyrdom, and his foretellings cannot be untrue."

Imam Husayn's (A.S.) party reached Karbala on the second of Muharram. But the supporters that had originally invited him to Kufa were no longer his to command. Having got wind of their intentions, Yazid appointed Ibn Ziyad, governor of Kufa, to carry out orders to subvert their plans, and this they had achieved successfully. With the Imam's following cunningly eliminated, forces were sent to meet him near Karbala.

The tents were pitched and at night Imam Husayn (A.S.) sat cleaning his sword and reciting couplets forecasting his doom. His son Zayn ul-Abidin (A.S.) listened quietly but in sorrow. When Zaynab (A.S.) heard him she could not restrain her tears. She went to her brother and prayed that death would overtake her. Imam Husayn (A.S.) urged her not to let Shaytan deprive her of her power of fortitude. She asked whether she might be killed in his place, and when she heard his negative reply she fainted. When she came to, her brother said, "Everything is mortal. The final word lies with Allah and to Him is the return. My father and grandfather were better men than I but where are they now? Their example is the standard for me and for all Muslims."

So saying he bade her be patient and not to weep over his death or shed tears or beat her cheeks. He then took her to the tent of his son Ali Zayn ul-Abidin (A.S.) and left her there. But Zaynab (A.S.) was not to be consoled, and from this time came to be known as Baakiyah (one who weeps).

On the eve of the tenth day of Muharram, Imam Husayn (A.S.) addressed his followers, the Ansar and the Bani Hashim. It had become clear that this was to be a battle unto death. He therefore released them from any obligation to remain by his side, and let them know that no grudge would be held against them were they to turn away from the coming decisive battle and return to safety.

There was now no doubt about the slaughter that was to come. Despite the heavy burden of knowing this insurmountable fact, Zaynab (A.S.) maintained her tranquility through constant prayer and remembrance of the ultimate cause for which their lives were being sacrificed.

lt was her destiny to proclaim to the world the sacrifices made by Imam Husayn and the other members of the family of the Holy Prophet [s.a.w.] for the cause of Islam. She exposed the evil deeds of Ibn Ziyad and Yazid with courage and fearlessness. Had it not been for her the sacrifice of Karbala might have faded into oblivion. She endured physical pain and mental torture with fortitude and was a source of strength to all around her. The sorrow and grief she expressed was an outpouring of her intense humanity. Never did she rebel against the destiny decreed by Allah. The strength of her submission was divine, yet her lamentation poignantly human.
The spirit of Zaynab (A.S.) will live forever. Her courage, forbearance, and submission will continue to inspire those who hear her story for all time to come.