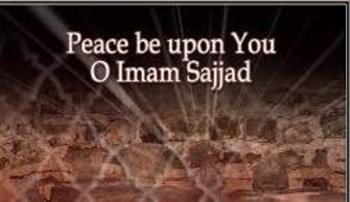 The fourth Imam after Imam Hussain was his son Imam Ali Zain-al-Abideen. His mother was Bibi Shahar Bano who was a princess from Persia, the daughter of the Kind Yazd Gard II. She was brought as a prisoner of war during the caliphate period of Imam Ali during 31 A.H. and Imam Ali got her freed and married her to Imam Hussain. Imam Zain-al-Abideen was born from this wedlock. She, however, died within 10 days of the birth of Imam Sajjad.

His title Zain-al-Abideen was granted to him by the Holy Prophet himself who mentioned that on the Day of Judgment a call for Zain-al-Abideen will be made and my son Ali bin al-Hussain will respond to the call saying Labbaik. His other Title, Syed-us-Sajideen, was given because of his devotion to prayers. He would pray for long durations especially during the nights and would pray many prayers of gratitude - Namaz-e-Shukrana.

Period of Imamate and events of Karbala

Imam Sajjad was about 22 or 23 years old when the sad event of Karbala occurred. Since Allah mentions in his holy Book that this world cannot survive for a moment if there is no Masoom Imam present at all times, Allah arranged it such that Imam Sajjad became severely ill during that battle and could not participate as a warrior. He asked the permission to fight in the battle but Imam Hussain told him that he had been assigned a different type of Jihad that was to start after the martyrdom of Imam Hussain - namely leading the women and children of the household of Prophet Mohammad into the bazars and courts of Kufa and Damascus. Imam Sajjad was made a prisoner of war together with the whole family of the Prophet Mohammad. It was at this time that he was given the responsibility of Imamate and his was one of the most difficult times when any Imam was given this responsibility. Truly speaking, for him, it would have been very easy to die on the battlefield as a martyr than to be taken as prisoner of war and see all the insult and humiliations thrown on him and on the womenfolk of the house of the Prophet. However, he did what Allah wished him to do.

After the martyrdom of Imam Hussain, the survival of Islam depended on Imam Zainul Abideen, and that also at a tender age of 22. He had a very hard job of letting the world know the mission of Imam Hussain and exposing the evil intentions of Yazid and the Bani Umayyah. He had to keep the message of Islam alive and save it from being confused by the evil Bani Umayyah.

Imam Zayn al-'Abidin, peace be on him, became old and weak. This is because he exhausted himself by hard worship and obedience to Allah. The historians unanimously agreed that the Imam passed most his lifetime fasting by day and standing in prayer by night. Meanwhile, he remembered the tragedy of Karbala`'. When he looked at his aunts and his sisters, he remembered their escape from one tent to another, and the caller of the people called out: Burn the houses of the wrongdoers! These memories saddened him very much and affected his body.

The Imam is given poison

Imam Zayn al-'Abidin enjoyed great popularity. The people spoke with admiration about his knowledge, his jurisprudence, and his acts of worship. The assemblies admired his patience and all his other qualities. The Imam occupied the hearts and feelings of the people. Hence blessed was he who saw him, met him, and listened to his words.
This situation frightened the Umayyads, especially as it concerns al-Walid b. 'Abd al-Malik, who was the most spiteful toward the Imam.
Al-Zuhri reported on the authority of al-Walid b. 'Abd al-Malik, who said: I cannot have a rest as long as 'Ali b. al-Husayn is in this world!(Haya`t al-Imam Mohammed al-Ba`qir, vol. 1, p. 51).
When al-Walid became king, he decided to assassinate the Imam. He sent poison to his governor of Medina, and ordered him to mix the poison (with liquid) and give it to the Imam to drink.(Al-Itha`f bi Hub al-Ashra`f, p. 52. Al-Sawa`'iq al-Muhriqa, p. 53).
The poison reacted on the Imam's body, and he suffered severe pain. The Imam remained on the bed of illness for some days. He complained to Allah of this and asked Him for forgiveness and good pleasure. The people crowded to visit him, and he, peace be on him, praised and lauded Allah for providing him with martyrdom at the hand of the most wicked creature.

His Designation of al-Baqir for the Imamate

Imam Zayn al-'Abidin, peace be on him, entrusted the Imamate to his son al-Ba`qir, peace be on him, who was the pioneer of the cultural, scientific movement in Islam.
Al-Zuhri said: I visited 'Ali b. al-Husayn and asked him: If Allah's inevitable command comes, whom shall we follow after you?
The Imam gently looked at him and replied: (Follow) this son of mine (pointing to his son Mohammed al-Ba`qir), for he is my testamentary trustee, my inheritor, the box of my knowledge, the origin of knowledge, and the one who will split knowledge open.
Why have you not appointed your most obedient son as your testamentary trustee? asked al-Zuhri.
Al-Zuhri did not understand the affair of the Imamate. He thought that it was based on the tribal customs.
O Aba` 'Abd Allah, the Imamate is not based on oldness and youngness. In this manner, Allah' Apostle, may Allah bless him and his family, entrusted (the Imamate) to us, and in this manner we have found it in the tablet (lawh) and the parchment (sahifa), answered the Imam.
Demanding more information, al-Zuhri asked: O Son of Allah's Apostle, did your Prophet appoint you as testamentary trustees after him?
We have found twelve names in the parchment and the tablet.
Their Imamate, the names of their fathers, and of their mothers have been written in the tablet, replied the Imam, and seven testamentary trustees will come out of the loins of my son Mohammed. Al-Mahdi will be one of them.
(Al-Khazza`z, Kifa`yat al-Athar. Ithba`t al-Huda`t, vol. 5, p. 264).
Some Shi'ites visited the Imam, and he nominated his son Mohammed al-Ba`qir before them, and ordered them to follow him. Then he gave him a document and a box in which were the inheritances of the prophets, the weapon and books of Allah's Apostle, may Allah bless him and his family.
(Basa`'ir al-Daraja`t, p. 146. Ithba`t al-Huda`t, vol. 5, p. 268).

His Commandments to his Son al-Ba`qir

Imam Zayn al-'Abidin, peace be on him, entrusted his commandments to his son Imam Mohammed al-Ba`qir, peace be on him. The following is some of his commandments to him:
1. He commanded him (to take care of ) his she-camel. He said to him: I performed the hajj on this she-camel of mine twenty times, yet I did not whip it. When it dies, bury it. Let not the beasts eat its meat, for Allah's Messengers, may Allah bless him and his family, said: 'If a camel stops seven times at 'Arafa, Allah will place it among the favors of the Garden, and bless its offspring.(Al-Barqi, Maha`sin, vol. 2, p. 635).
Imam al-Ba`qir carried out these commandments of his father.
2. The Imam gave to his son this commandment, which displays the brilliant sides of the qualities of the members of the House (ahl al-Bayt) , peace be on them. He said to him: O my little son, I will command you with what my father commanded me when death was close to him. He said to me: 'O my little son, beware of wronging him who finds no helper against you except Allah.(Al-Ama`li, p. 161. Al-Khisa`l, p. 185).

3. He commanded him to wash and shroud him and to undertake all his other affairs until he buried him in his final resting place.

At his Final Resting Place

In the middle of a halo of exclaiming Allah is great and praising Him, the people brought the Holy Corpse to al-Baqi Cemetery. They dug a grave for him beside the grave of his pure uncle, Imam al-Hasan, the master of the youths of Paradise, and the plant of sweet basil of Allah's Apostle, may
Allah bless him and his family.
Then Imam al-Ba`qir, peace be on him, buried his father in his final resting place. With him, he buried knowledge, kindness, and reverential fear, spirituality of the prophets and of the Allah-fearing. After Imam al-Ba`qir had finished burying his father, the people hurried to him to condole him. The Imam, his brothers, and the other Ha`shimites, thanked them for their condolences.