The Marriage of Imam Ali and Lady Fatima 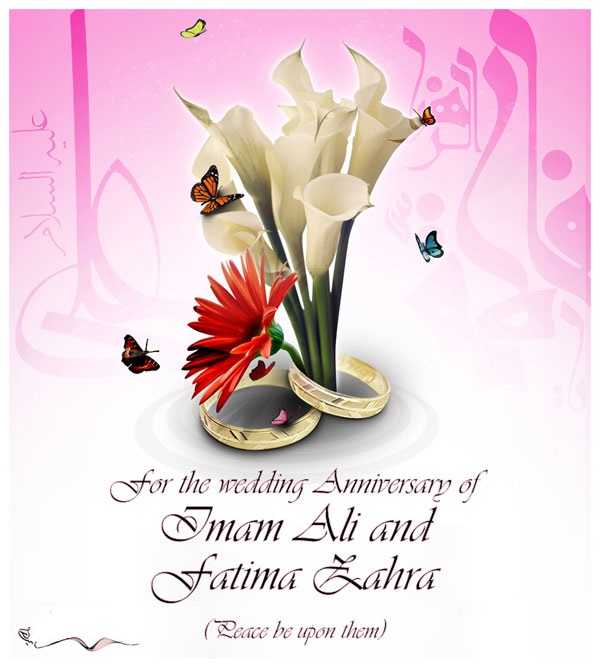 The Holy Prophet of Islam said, “In the event that Ali would not have been created, there would have been no one worthy to be Fatima’s spouse.”

A Marriage Made in Heaven

The extraordinary virtues of Lady Fatima (peace be upon her) on one hand, her blood relations with the Prophet on the other hand, and the nobility of her family furthermore, caused many of the high-ranking supporters of the Prophet to propose to her; but all heard negative answers. Each time, the Prophet would usually answer them, saying: “Her matter is in the hands of her Lord.”

After many people came to propose Fatima and were rejected, it was heard everywhere that the Prophet wished to give his only daughter to Ali ibn Abi Talib (peace be upon him) in marriage. Imam Ali did not have access to worldly wealth and possessions, nor did he possess any of the standards of the Age of Ignorance; rather, instead he was from head to toe full of faith and real Islamic values. Indeed, this blessed historical marriage was a heavenly revelation, because the Prophet himself said: “An angel of God came to me and told me that God sends you greetings and says: ‘I have made Fatima the wife of Ali ibn Abi Talib in the highest heavens already, so you should also marry her to him on earth.'” (Dhakair al-Abqa)

When Imam Ali went to the Prophet with his marriage proposal for Lady Fatima, his face was red with shyness. When the Prophet saw him, he became cheerful and smiled, asking him why he had come. But Imam Ali, because of the imposing presence of the Prophet, could not put forth his wish and, as such, remained silent.

It is true that the marriage was heavenly and must take place. But especially because of the high status of Lady Fatima, and to demonstrate the respect and freedom of women in choosing their husbands, it was necessary that the Prophet of Islam should not go ahead in this matter without the consent of Lady Fatima.

When the Prophet described the virtues of Imam Ali for his daughter, he said: “I wish to make you the wife of the best of God’s creation. What is your opinion?” Lady Fatima, who was submerged in shyness and modesty, lowered her head saying nothing and denying nothing. The Prophet raised his head and spoke this historical sentence, which is a proof for Islamic jurists today in relation to the marriage of previously unmarried girls: “God is the Greatest! Her silence is the proof of her agreement.”

Following these events, the marriage contract was concluded by the Holy Prophet.

It is without doubt that the marriage of the Best of Men in the world with the Princess of the World’s Women must in every way be an example – one for all centuries and ages. Therefore, the Prophet turned to Imam Ali and asked: “Do you have something to stipulate as your wife’s dowry?” He replied: “May my parents be your sacrifice, as you well know, my belongings consist of nothing more than my sword, armor, and a camel.” The Prophet said: “That is right. Your sword is needed during battles with the enemies of Islam. And you must water your palm orchards with your camel and also use it on journeys. Therefore, you may only stipulate your armor as your wife’s dowry – and I give in my daughter Fatima to you against this very armor.” (Ihqaq al-Haq)

This is one side of the story, but on the other side we read in narrations that Lady Fatima asked her father to make her dowry her ability to intercede for the wrongdoers of the nation on the Day of Resurrection. This request was granted, and Gabriel revealed this command to the Prophet from Heaven. (Akhbaru Duwal)

The materialistic simplicity and spiritual magnificence of Lady Fatima’s dowry is an example for all of humanity. It is an example of how incorrect values must be torn down and replaced with pure values, of the custom of faithful men and women, and of the way of life for the true leaders of God’s servants.

This ceremony took place for the establishment of a family, by which an important part of Islam’s history was changed, and by which the pure successors of the Prophet would all come into existence. The Prophet executed such a program that his enemies became jealous and his friends became proud! His actions urge others to ponder and even act upon it.

Lady Umm Salamah and Lady Umm Ayman – two virtuous women of Islam and had great affection for the noble Lady Fatima Zahra – came to the Prophet of Islam and said: “O honorable Prophet of God! Indeed, if Khadija (peace be upon her) were alive, she would really be happy with the convening of Fatima’s wedding ceremony, isn’t that so?”

Tears came into the eyes of the Messenger of God upon hearing the name of that devoted Lady, and he began remembering all of the kindness and generosity of Khadija, saying: “Where can a woman be found like Khadija? Those days when all of the people denied me, she confirmed me, placing all of her wealth and life in my hands for spreading of God’s religion. She was the very lady whom God ordered me to inform that an emerald castle will be granted to her in the exalted Heavens.”

When she heard this, Umm Salamah said: “O Messenger of God, may my parents be your sacrifice! Whatever you say about Khadija is the truth, but at any rate, she welcomed God’s invitation and has rushed to the vicinity of His Mercy. Hopefully, God will house her in the best place in Heaven. But, the matter for which we have come to your blessed presence is something else, and that being this: your brother and cousin, Ali, wishes you to permit him to take his wife Fatima to his home, and in this way bring order to his life.”

The Prophet asked: “Why didn’t Ali bring this proposal to me himself?” Umm Salamah replied: “Shyness and modesty prevented him.” Here, the Prophet told Umm Ayman: “Go and tell him to come here.”

Imam Ali came and sat before the Prophet, but his head was lowered out of shyness. The Prophet said: “Do you wish to take your wife home?” While his head was still lowered, Imam Ali said: “Yes, may my parents be your sacrifice.”

What is interesting to note is that, contrary to what is usual among those people who worship opulence and who begin planning months ahead of this ceremony, the Prophet happily said: “I will arrange for it either tonight or tomorrow night.” Right then he gave the orders to arrange for the preparation of a very simple celebration that was full of spirituality and holiness.

As for the formalities of this heavenly celebration and its ceremonies, it was conducted so simply and without trouble that hearing about it is quite astonishing for us these days.

Imam Ali said: “A bit of the money from the armor I had sold previously had been given to Umm Salamah for safekeeping, and during the nuptial ceremony, the Prophet took ten dirham from her and gave it to me, saying: ‘Buy some oil, dates, and kashk with this money.’ I did this. Then the Prophet himself rolled up his sleeves and mixed these things together with his own hands, preparing a meal and serving the people with this very food.

“Then he said, ‘O Ali, invite whomever you wish.’ I left for the mosque where many companions of the Prophet were gathered. I said, ‘Answer the Prophet’s invitation.’ They arose and headed together towards the Prophet. I told the Prophet that they were a large crowd; he covered the food with a sheet and said: ‘Show them in, ten at a time’, and so I did. The people kept going in, eating, and leaving, all the while the food seemed unabated. In all, seven hundred men and women ate from that (date and yogurt) dish with the Prophet’s blessing.”

At the end of the ceremony, when all of the people had returned to their homes and the house became empty, the Prophet of Islam placed Lady Fatima on his left side and Imam Ali on his right and wished them good luck by spraying a bit of sacred saliva from his mouth on both Lady Fatima and Imam Ali and prayed for them, saying: “O Allah! They are of me, and I am of them. O Lord! Just as you removed every kind of filth and impurity from me, also remove it from them, rendering them pure.” Then he said: “Get up and go home. May God bless both of you.” (Tarikh al-Zahra)

Those who seek the material world and the weak believers who are under the influence of the material world’s sparkle, who see a family’s respect, honor, status, blessings and grandeur of the wedding ceremony in backbreaking, oppressive formalities and luxurious objects should examine this example and learn a lesson. They should see and gain inspiration from this event that is a lesson in humanity, and is the substance of the happiness of all boys and girls. Learn about and act upon the Islamic teachings in a practical way, as seen in the events of the proposal, dowry, trousseau, and wedding of Lady Fatima Zahra in the annals of history.

Comments
Facebook Comments
Related topics
The path of al-Imam al-Hussein is the path of the messengers of Allah
al-Imam al-Hussein (as) In The Old Testament and the New Testament
To know…
Youths and Friendship
The Media at Fault
How do we Illustrate Imam Husayn’s Message Cinematically?
What is Ashura?
Eid al-Ghadeer
Imam Hussein: The Founder of Civilization
The revolution of Imam Hussein and the humanitarian goals