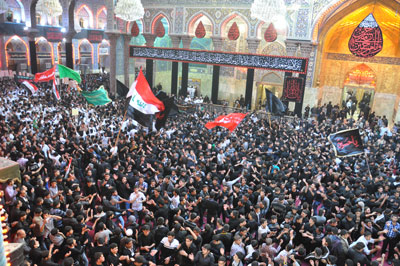 On the 10th day of the month of Muharram 61AH (October 11th 680 AD), a tragic event took place in the southern part of Iraq at a place known as Karbala on the bank of the Euphrates river. It seemed in those days insignificant from the historical point of view. A large army of 30,000 that had been mobilized by the Umayyad regime, besieged Imam Hussein, the grandson of the holy prophet Muhammad, and 71 of his loyal companions and forced them to pay allegiance to the corrupt caliph Yazid and to submit to his authority. The small group resisted and a severe battle took place in which the Imam and all his companions were killed, and his female family members were taken as war prisoners.

It appeared at that time, like hundreds of similar events, that this battle would be recorded in history and forgotten in time. However, the events that occurred on the 10th of Muharram in Karbala were to become a beacon and an inspiration for future generations, and a reflection of good versus evil.

Who was this small group? The leader of the small band of men who were martyred in Karbala was none other than Hussein, son of Ali ibn Abi Talib and Fatima daughter of the Prophet, and grandson of the Prophet, for whom the Prophet once said, “Hussain is from me and I am from Hussein. May Allah love whoever loves Hussein.” Accompanying this small group were Hussein's immediate family, relatives, and close companions.

Upon the murder of his brother Hassan, Hussein became the leader of the household of the Prophet. Hussein honored the agreement of peace signed by his brother Hassan, in order to safeguard the security of the Muslim nation, which was at stake with the tyrant ruler Mu’awiyah. Despite the urging of his followers, Hussein did not undertake any activity that threatened the political status quo. Rather he continued with the responsibility of looking after the religious needs of the people and was recognized for his knowledge, piety, and generosity.

A brief history of the enemy. The second caliph appointed Mu’awiyah as the governor of Syria. Mu’awiyah hypocritically became a Muslim only when the Prophet triumphed over Mecca. Those who became Muslim in this manner were called tulaqqa’, a term scornfully used for the disbelievers who became Muslims to save their lives. Mu’awiyah’s family and ancestors were all termed tulaqqa’, and were also known as active opponents to Islam. Mu’awiyah never forgot this stigma, or the hostility his family held towards Islam, thus a feeling of vengeance always existed in his heart.

Upon seizing power, Mu’awiyah took advantage of the rich public treasury, using it personally to buy favors and influence people. He began killing his opponents and critics, and conspired the murder of Imam Hassan. He also started campaigning to introduce monarchy into the political system of Islam. Mu’awiyah sent his agents to prominent members of the communities to obtain allegiance of loyalty to his son Yazid. People protested vigorously and Mu’awiyah used his traditional method of coercion—money and the sword. Upon Mu’awiyah’s death, his son Yazid, age of 30, managed to impose himself on the people and became the caliph using all possible means like bribery, pressure, threats, and force. People refused to recognize him as the representative of the Prophet and the leader of the Islamic nation. Yazid commissioned his governor over Medina, to ask for Imam Hussein's allegiance of loyalty or else his life. Imam Hussein was quick to realize that giving allegiance of loyalty to Yazid would serve no purpose but to jeopardize the survival of Islam. The principles and laws of Islam demanded that Hussein act to warn and safeguard the Islamic nation of the evil situation which it was in, and to stand in the way of the deviating ruler.

Karbala and the day of Ashura. Imam Hussein was certain that by awakening the misery lives of the Muslim nation, under the tyrannical rule of Yazid, was to sacrifice his blood for the sake of defending Islam. The people of Kufa (a town in southern Iraq) sent over 12,000 letters to Imam Hussein inviting him to their city in support for his leadership. Imam Hussein remarked when he left his hometown with his family and companions for the last time, “I am not rising against Yazid as an insolent or an arrogant person, or as a mischief-monger, or tyrant. I have risen against Yazid as I seek to reform the Ummah (Islamic nation) of my grandfather. I wish to bid the good and forbid the evil.”

Before reaching the city of Kufa, Imam Hussein's small group was intercepted by the large army of Umayyad. The army quickly surrounded and trapped Imam Hussein, his family, and companions in the desert plains called Karbala. Within 10 days, Imam’s camp was subject to hunger, thirst, and brutal killings. The 10th of Muharram marked the end of the tragedy but the beginning of enlightenment. While praying, Imam Hussein  was killed, his body trampled beneath the hoofs of horses and his head cut off, speared, and paraded before his captivated family and a few companions, and through the villages and towns as they were taken to Damascus and his head presented at the feet of Yazid.

Why do Muslims remember Ashura? Imam Hussein sacrificed his life along with 72 believing men, all for the sake of truth over falsehood. The tragedy of Karbala represents a conscious confrontation and a courageous resistance for a sacred cause. The whole nation had failed to stand up to Yazid. They had succumbed to his will, and deviation and regression towards the pre-Islamic ways that were increasing.

Passiveness by Hussein in this situation would have meant the end of Islam, as we know it. Imam Hussein took it upon himself the responsibility of the whole nation. The greatest tragedy was he stood up for the noblest of causes—the defense of Islam, and was killed in such a cruel manner.

It is for this reason that the sacrifice of Hussein is commemorated annually throughout the Muslim world. The tragic event shook the very foundations of the Muslim nation, stirred their consciousness, and became a beacon of light and guidance. The 10th of Muharram, Ashura serves as a reminder of the sacrifice of the family of the Prophet. It also makes Muslims aware of the people, then and now, who tried to destroy Islam and the family of the Prophet and all that they stood for, as well as those who watched, listened, and did nothing.

After the death of Mu’awiyah, Imam Hussein faced two bitter choices by the governor of Medina: either to pay allegiance to the tyrant Yazid or to face execution. Because of the threat, Imam Hussein was forced to leave his birthplace, the city of Medina, to Makkah on the 29th of Rajab60H/May 6th 680AD.

The distance between Medina and Makkah is 420km. It took the Imam and his family five days to travel to Makkah, they arrived on the 4th of Sha'ban 60H/May 11th 680AD.

Imam Hussein stayed in Makkah for 120 days, from the 4th of Sha'ban to the 7th of Dhil Hijjah 60H/May 11th to September 9th 680AD. During this time, Imam Hussein received thousands of letters and delegates from Iraq inviting him to lead the movement against the unjust rule of Bani Umayyad.

Still under the threat of assassination by Bani Umayyad, Imam Hussein, his family, and companions abruptly departed Makkah and headed towards Iraq on the 8th of Dhil Hijjah/September 10th 680AD, the same day that the pilgrims leave for Makkah to Mena to perform the pilgrimage.

The distance between Makkah and Karbala, Iraq is 1,470km. At an average rate of 64km, it took the caravan of Imam Hussein 23 days to journey to Karbala. After passing 38 resting stations and villages Hussein's caravan finally reached the land of Karbala on the 2nd of Muharram 61H/October 3rd 680AD.

The army of Bani Umayyad surrounded the camp of Imam Hussein in Karbala on the 9th of Muharram/October 10th 680AD. The army numbered 30,000 soldiers commanded by Omar ibn Sa’d.

The army of Bani Umayyad launched the battle of Ashura on the 10th morning of Muharram 61H/October 11th 680AD. The battle lasted for several hours. Imam Hussein, his family members, and his 72 companions were massacred. Only one man survived, his son Imam Ali ibn Al-Hussein Zainul Abidin, who assumed the Immamah (succession to the Prophet).

The remaining women and children of the family of Imam Hussein were driven as prisoners of war on the 11th of Muharram/October 12th to the city of Kufa to meet with Ibn Ziyad, the Governor of Bani Umayyad in Iraq.

"I did not leave Medina for doing mischief, corruption, or injustice; but I only left with an aim of reforming the tradition of my grandfather. I intend to enjoin what is good and to prohibit what is evil."
- Imam Hussein

Comments
Facebook Comments
Related topics
The path of al-Imam al-Hussein is the path of the messengers of Allah
al-Imam al-Hussein (as) In The Old Testament and the New Testament
To know…
Youths and Friendship
The Media at Fault
How do we Illustrate Imam Husayn’s Message Cinematically?
Eid al-Ghadeer
The Marriage of Imam Ali and Lady Fatima
Imam Hussein: The Founder of Civilization
The revolution of Imam Hussein and the humanitarian goals