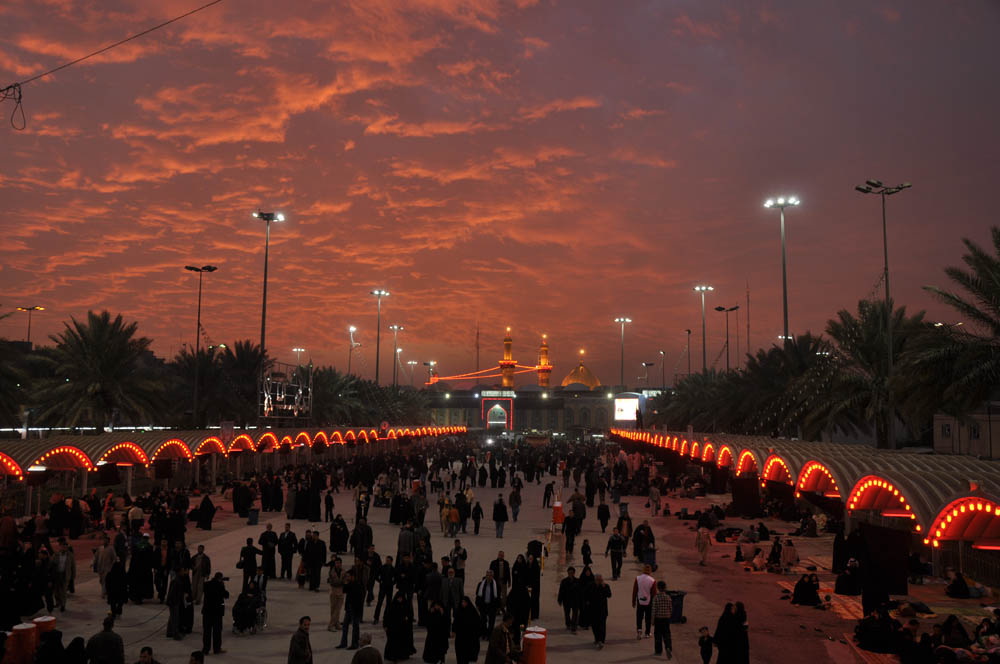 There exist both within the Old Testament and the New Testament references about al-Imam al-Hussein (as). If we look comprehensively through some of the books of the Old Testament and the New Testament we will notice the glad tidings about the Prophet Muhammad (p) and the Twelve Imams (as). It has been reported in the book of Genesis that God said to Abraham (p) “I will keep my covenant with him and with his descendants forever. It is an everlasting covenant. I have heard your request about Ishmail. So I will bless him and give him many children and many descendants. He will be the father of twelve princes and I will make a great nation of his descendants”. (1)

The Bible has recorded a great number of Prophets and Messengers’ sayings about al-Imam al-Hussein (as), his sufferings and what calamities have been inflicted upon him.

The name of al-Imam al-Hussein (as) in the Old Testament is (Shabeer) and the New Testament is (Tab). (2) It has been mentioned that Prophet Zechariah (as) cried and wept for al-Imam al-Hussein’s afflictions (3). Upon their arrival at Karbala the Prophet and the Messenger ‘Isa (Jesus) (as) and his apostles also sat crying on its land, and ‘Isa (Jesus) (as) said: “This is the land where the son of the Messenger Ahmad (p) and the son of noble and chaste woman (al-Batoul) who is similar to my mother will be buried. The clay of his grave is better than musk because it is the burial place of the martyr. As such the graves of the prophets and the sons of the prophets are.”(4)

al-Imam al-Hussein (as) such as:

“I am worn out from calling for help, and my throat is aching.”(6) “I have strained my eyes looking for help.”(7) “It is for your sake that I have been insulted.”(8)

“I am like a stranger to my brothers, like a foreigner to my family.” (9) “Those who hate me for no reason are more numerous than the hairs of my head. My enemies tell lies against me. They are strong and want to kill me.”(10)

The Umayyads killed the grandson of Prophet Muhammad (p), not for any reason except fearing for their worldly life and their rule. The ‘Abbasids followed him after his martyrdom. They regretted that they did not participate in his killing. Therefore, they destroyed his grave (236A.H). (11)

“If anyone places the character of an Umayyad or ‘Abbasid ruler as an example simply to denounce Islam, the character of al-Imam al-Hussein (as) immediately appears in defence before him on the pages of the Islamic history.”(12)

After this short pause, let us go back to the Psalms to see what happened to al-Imam al-Hussein (as) on the land of Karbala “When I was hungry they gave me poison, when I was thirsty, they offered me vinegar”(13). “I have relied on you Lord since the day I was born, and you have always been my God.”(14) “My strength is gone; my throat is as dry as dust and my tongue sticks to the roof of my mouth.”(15) “A gang of evil men is around me.”(16) “My enemies look at me and stare.”(17) “They gamble for my clothes and divide them amongst themselves.”(18)That is exactly what happened to al-Imam al-Hussein (as) on the 10th of Muharram. They stripped him of his clothes after his martyrdom and divided them amongst themselves. It has been reported that on that day al-Imam al-Hussein (as) asked his relatives and companions to bring him undesirable clothes to wear under his main clothes, because he was going to be killed and stripped of his clothes. According to the records of the historians, after he was killed his turban was taken by Jabir b.Yazid al-Azdi, his shirt by Ishaq b. Haywat al-Hadrami, his garment by Qais b. al-Ash‘ath, his trousers by Bahro b. Ka‘ab al-Tamimi, his bow by al-Rahil b. Khaythama al-Joua‘fi, his shoes by al-Aswad al-Awsee, and his sword by a man of Bani Nahshal. (19)

It is worth mentioning that the ( Du‘a) supplication of al-Imam al-Hussein (as) on the 10th of Muharram against those who betrayed him and rallied people and fought against him is very close in its meaning and style of expression to that which was mentioned in the book of Psalms. “Strike them with blindness. Make their backs always weak. Pour out your anger on them; let your indignation overtake them. May their camps be left deserted; may no one be left alive in their tents. Keep a record of all their sins; do not let them have any part in your salvation. May their names be erased from the book of the living; may they not be included in the list of your people.”(20)

Furthermore, when you look at the book of Isaiah, it illustrates that people betray and abandon him, but he endures these suffering and pain. No one comes to save and rescue him from his enemies [of course, except his close relatives such as his son ‘Ali al-Akbar and his brother Abul Fadl al-‘Abbas and his companions who sacrificed their lives for the cause of al-Imam al-Hussein (as) which is indeed the cause of al-Mighty Allah] “We despised him and rejected him; he endured suffering and pain. No one even looked at him.”(21)

As for al-Imam al-Hussein’s martyrdom; the same book describes the battle of karbala and the way in which the army of the unjust ruler Yazid b. Mu‘awiya treated him. But “he endured it humbly. Like a lamb to be slaughtered, like a sheep to be sheared, even though he had never committed a crime or ever told a lie.” (22)

The Lord says; “it was my will that he should suffer; his death was a sacrifice…and so he will see his descendants; he will live a long life and through him my purpose will succeed. After a life of suffering, he will again have joy; he will know that he did not suffer in vain. My devoted servant with whom I am pleased, and so I will give him a place amongst great and powerful men. He willingly gave his life” (23).

When we investigate the Prophet Muhammad’s traditions about al-Imam al-Hussein and his interpretation of this verse of the Holy Quran “And wemade it a word to continue in his posterity. (24) We realise that it corresponds with the prophet Isaiah’s sayings.

It has been narrated that Prophet Muhammad (p) said, “Allah made the Imamate through the descendants of al-Hussein. Nine Imams will descend from him. One of them is al-Mahdi, the rightly guided of this nation.”(25)

Ibn Hammad an Arab poet took that tradition of the Prophet (p) and composed it in a verse of poems. He said, “This Imam is the son of an Imam from whom we have an Imam in every period of time.”(26)

In the book of the Prophet Jeremiah (as) we notice another description of the battle of Karbala. “In the north, by the Euphrates they stumble and fall.”(27)

It is worth noting that after careful examination and investigation of certain books of The Old Testament and the New Testament, it is safe to say that  al-Imam al-Hussein (as) and (Ahl-ul-Bait) (as) were mentioned in the divine books which had been revealed and descended on the Messengers of Allah, despite the alteration which took place in these books throughout history, even during the life of Moses (as). On the other hand, if we compare the verses of the Prophets in The Old Testament and the New Testament, with the life of al-Imam al-Hussein (as) in particular on the 10th of Muharram 61A.H/685, we will find that these incidences only befit al-Imam al-Hussein (as).

“The criticisms by the independent non-Muslim scholars have proved this fact beyond any doubt. What has been discovered today after laborious efforts of dispassionate research by independent scholars about the scriptures has already been disclosed by the Holy Qur’an more than one thousand and four hundred years ago, that the scriptures have been altered.”(28)“Do you thenhope that they would believe in you, and a party from amongst them indeed used to hear the Word of Allah, then altered it after they had understood it, and they know(this).”(29) “O followers of the Book indeed our Apostle has come to you making clear to you much of what you concealed of the Book and passing over much; indeed, there has come to you light and a clear Book from Allah.”(30)

28- S.V.Mir Ahmed ‘Ali, The Holy Qur’an with English translation of the Arabic text and commentary according to the version of Ahl-ul-Bait (as).

Comments
Facebook Comments
Related topics
The path of al-Imam al-Hussein is the path of the messengers of Allah
To know…
Youths and Friendship
The Media at Fault
How do we Illustrate Imam Husayn’s Message Cinematically?
What is Ashura?
Eid al-Ghadeer
The Marriage of Imam Ali and Lady Fatima
Imam Hussein: The Founder of Civilization
The revolution of Imam Hussein and the humanitarian goals